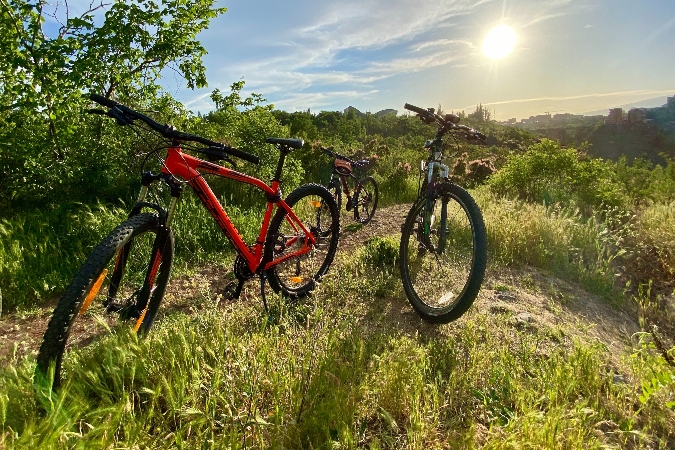 At first glance, an electric bicycle looks very similar to a standard, human-powered bike. But the differences between the two go beyond aesthetics—add a motor, hydraulic brakes, a lithium-ion battery, and a throttle, and you’ve got an e-bike. So how do all those moving parts work together to boost you up steep hills or carry heavy loads? Let’s go over everything that makes an electric bike tick and finally answer that burning question: how does an electric bike work?

What Is An Electric Bike?

An electric bike has two wheels, a seat, and pedals just like a standard bicycle, but it’s also powered by a motor, battery, and/or throttle. E-bikes have become popular in cities with large populations because the cost of an electric bike makes it an efficient alternative to driving. Even people who live in more rural areas have found electric bikes to be a fast and easy method for going to the store or commuting to work.

A basic electric bike has something called pedal-assist (these bikes are also called “pedelec bikes”). As you pump the pedals, the motor kicks into gear and pushes you forward. E-bikes can travel up to 15-20 MPH. E-bikes are classified by how fast they go, and these different classes are regulated by federal or local jurisdictions. In the United States, the most popular e-bikes are Class 1 or Class 2 e-bikes, meaning they do not travel faster than 20 MPH. While that may seem slow, it’s actually a pretty good pace and can cut your commute in half (especially if you regularly deal with traffic snarls).

The Essential Parts of an Electric Bike

Some electric bikes come with a myriad of features, like a rechargeable battery (one that recharges as you pedal), integrated lights to make night-rides safer, or sleek fenders. While these are nice to have, they aren’t key parts of an electric bike. Every e-bike needs a good motor, a battery, a frame, and brakes.

When it comes to e-bike motors, not all are created equal. The two most common motor types are a hub motor and a mid-drive motor. A hub motor sits on the front or rear wheel. As you can imagine, a heavy object like that on the wheels can make your center of gravity a little wobbly and your ride less efficient. Hub motors are cheaper, but your ride isn’t as smooth. A mid-drive motor is mounted in the bike’s center and connected to the pedal sprocket. With a mid-drive motor, the center of gravity is shifted to, well, the center!

The type of motor your e-bike has will affect its overall efficiency and durability.

Without the battery, an electric bike is just another bike. The battery powers the motor, which is what gets you where you need to go! Most e-bike batteries have about 350-500 watts of power. You can’t just use any battery on an e-bike either. It should be lightweight as well as powerful so it’s not weighing you down. Older e-bike models are usually fitted with lead batteries, but they don’t store as much power and they’re heavy. Go for a lithium-ion battery instead.

Lithium-ion batteries are lightweight but expensive, so some people choose cheaper nickel-cadmium batteries (also known as “nicad” batteries). Lithium-ions are the gold standard because they can power your bike for 10-40 miles on a single charge. It takes about 3-6 hours to recharge. Of course, if your battery dies while you’re out riding, you can always pedal your bike manually. Never underestimate how far you can go on sheer pedal power!

How do the batteries work? It depends on the type of e-bike you have:

The frame of a regular bike is typically made of aluminum alloy, making it very lightweight for efficiency. The same is true for high-quality e-bikes—the lighter the frame, the faster the bike. The spokes should be strong enough to resist bending or breaking, mainly because an e-bike has more torque (power moving it forward). Look for chrome, steel, or brass spokes.

The drivetrain refers to the pedals, cranks, chainrings, chain, and cogs (also called the cassette). All these parts work together to get your e-bike moving in the right direction. A mid-drive motor powers the drivetrain directly so you can shift gears and pedal easier. It’s another reason why mid-drive motors are the favorite for riders whose main priority is efficiency.

Both e-bikes and regular bicycles have brakes. But because e-bikes are more powerful and faster, their brakes need to be a little more substantial than the kind you’d find on a regular bicycle.

A pedal-assist bike is powered via the pedals, or more accurately, your feet on the pedals. In contrast, the first generation of e-bikes was mainly powered by throttles, usually found on the handlebars. Simply twist the throttle or press a button and your bike has power!

Cadence sensors are a throttle powered by your feet. As you ride your electric bike, a sensor tracks the movement of a magnet attached to the pedals. Then the sensor essentially “tells” the motor to turn on. It notices how fast you’re going and signals to the motor how much power to give as a result. However, this has obvious limitations. When you go uphill, the cadence sensor knows you are moving more slowly, so it tells the motor to give you less power, which is the opposite of what you need.

Torque sensors are the newest innovation. They measure how hard your feet are pressing down on the pedals. From your pedal pressure, the sensor tells the motor how much power to send to the drivetrain. If your bicycle has both a cadence sensor and a torque sensor, you can probably guess how fast and efficient your rides will be.

Now that you know all about how an electric bike works, you’re ready to try one out! Safety, durability, and efficiency should be your top priorities. Make sure the bike has high-quality brakes, a long-lasting battery, and an efficient power system so you get your money’s worth. And of course, always wear a helmet when you’re out there on the road. An e-bike has a lot of power behind it, and it can get you where you need to go in no time.